Who Is Viktor Bout, The Russian Arms Dealer Known As The ‘Merchant Of Death’ Swapped For Brittney Griner

Viktor Bout, a convicted arms dealer known as the “Merchant of Death,” was released by the U.S. as part of a prisoner swap that also freed women’s basketball star Brittney Griner, who had been jailed in Russia since February.

Russian state media has been saying for months that Griner could be traded for Bout whose freedom has been wanted by the Kremlin for a long time. Griner was sentenced to nine years in prison for having vape cartridges with cannabis oil in them.

Earlier reports had focused on a possible swap for both Griner and U.S. Marine veteran Paul Whelan, who was sentenced to 16 years in a Russian prison on espionage charges that he said were made up and that the U.S. government said were not true. But only Griner was part of the final deal.

On July 27, Secretary of State Antony Blinken gave the public its first look at how the U.S. is trying to get Griner and Whelan back home. He said that the U.S. has sent Russia a “substantial proposal.” After a week, Russian officials said they were “ready to talk” about a prisoner exchange.

At the time, U.S. media said that the offer on the table could include a prisoner swap for Bout. Biden administration officials wouldn’t say anything about this. The Kremlin said that there was no deal “yet,” and for a few months, there was no public information about any progress.

Blinken told CBS News’s Margaret Brennan on “Face the Nation” last Sunday that the U.S. has been “actively engaged” for months to “try to move things forward” and “get our people home.”

Bout was a former Soviet military translator who turned into an international arms dealer. He had been in prison for more than ten years when he was lured to Thailand as part of a three-continent Drug Enforcement Administration (DEA) sting.

Michael Braun, the former head of operations for the U.S. Drug Enforcement Administration, said on “60 Minutes” in 2010 that he thought Viktor Bout was one of the most dangerous people on Earth.

A 2012 profile in The New Yorker said that Bout, the son of a bookkeeper and an auto mechanic was forced to join the Soviet Army when he was 18. As a teenager, he played competitive volleyball. He was in an infantry brigade in western Ukraine for two years, and then he went to Moscow to study Portuguese at the Military Institute of Foreign Languages. Bout told The New Yorker that he was never a spy, but others, including his former business partner and a former CIA officer said that he had worked for the GRU the Soviet foreign military intelligence agency.

In 1995, when he was 28 years old, he started spending time in the cargo hangars at Sharjah’s International Airport in the United Arab Emirates. He eventually started his own cargo airline, Air Cess, with a small fleet of Russian planes that delivered goods to Africa and Afghanistan.

In the years that followed, Bout supplied more advanced weapons to both sides of civil wars all over the world. Bout said to the New Yorker, “If I didn’t do it, someone else would.”

By then U.S. and British officials were aware of him. Peter Hain, the minister of state for Africa in Britain’s Foreign Office, sounded the alarm as more and more advanced weapons were used to attack British soldiers in Africa.

“The conflict in Sierra Leone and Angola is still going on because of people who break sanctions. As a result, many people are dying and being hurt. Viktor Bout is the main person who breaks sanctions. He is also a “merchant of death” because he owns air companies that bring arms and other logistical support to rebels in Angola and Sierra Leone and take out the diamonds that pay for those arms, helping and supporting people who turn their guns on British soldiers “In 2000, Hain told the House of Commons this.

Damien Lewis’s book “Operation Relentless: The Hunt for the Richest Deadliest Criminal in History,” says that Hain came up with the name “Merchant of Death” on his own after reading another intelligence report about Bout’s activities. “It hit a nerve right away, and the press picked up the noise.”

In the U.S., Bout and his companies were hit with sanctions by the Treasury Department’s Office of Foreign Assets Control. These sanctions froze their assets and stopped them from doing business through American banks. But his business was hidden by front companies so well that the U.S. government hired two of his companies to deliver supplies to U.S. troops in Iraq without knowing it. 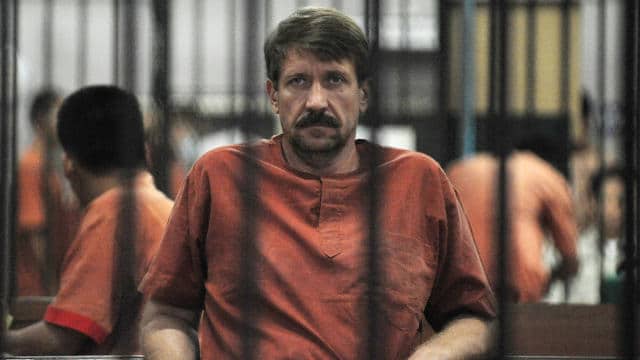 By 2007, the Drug Enforcement Administration had come up with a plan to get Bout out of Russia by offering him a hard-to-refuse arms deal. An undercover agent was sent to talk to a trusted business partner of Bout’s about a big business deal. This conversation led to the first meeting between the DEA’s fake arms buyers, who were pretending to be FARC officials, and Bout’s friend on the island of Curacao, which is about 300 miles off the coast of Colombia.

Andrew Smulian, who works with Bout, went to Moscow to show Bout the deal. Two weeks later, Smulian met with the spies in Copenhagen. He told them that his business partner liked the deal.

A few weeks later, Bout was on his way to Thailand. He thought he was going to meet with FARC officials to talk about sending what prosecutors called “an arsenal of military-grade weapons” to Colombia to attack American helicopters.

During a meeting in a Bangkok hotel conference room in March 2008, Bout told DEA agents who were pretending to be FARC officials that he could airdrop the weapons in Colombia and that the weapons could be used to kill Americans.

Thai police and DEA agents rushed into the room and arrested Bout after listening in on the meeting.

Bout said, “The game is over.”

After two years of court cases, he was sent to the U.S. in 2010. A year later, he was found guilty of terrorism.

Bout was given a 25-year prison sentence. The Federal Bureau of Prisons website says that he was supposed to stay in prison until August 2029, even though he was 55 years old at the time.

Before he was sentenced, Bout told The New Yorker, “They will try to put me in prison for life.” “I’ll go back to Russia, though. I’m not sure when. But I’m still young.”

Why Did Shannon Ruth Accuse Nick Carter Of Sexual Exploitation? Reality Behind It!