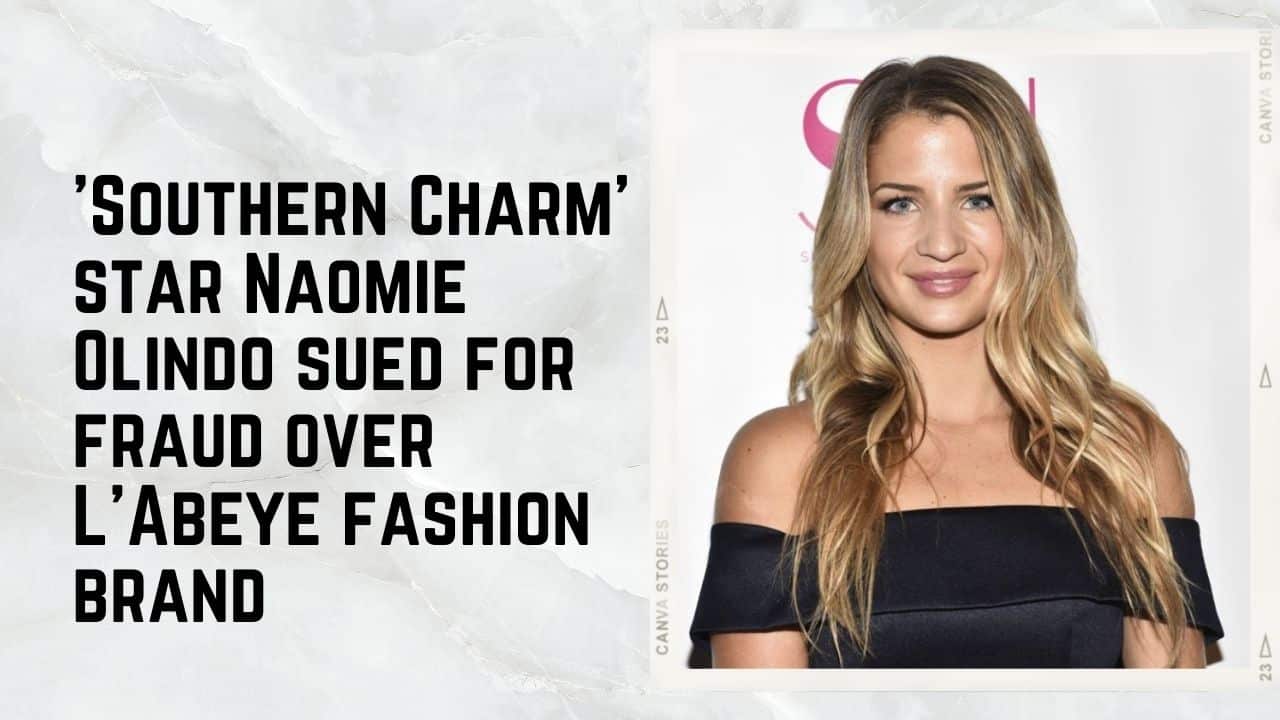 After she allegedly left their fashion company, L’Abeye, Naomie Olindo’s former business partner, is suing the “Southern Charm” actress for fraud and breach of contract.

Virginia “Ginny” Cox, who filed the complaint, alleges that Olindo, 30, used dishonest methods to maintain control of the company, steal money, and even prevent her from finding work after they split up. This information was obtained exclusively by Page Six.

The reality star allegedly approached the former retail store manager and buyer to join this joint venture as a co-owner with a 50% stake in early 2018 because of her experience in the fashion industry, according to the lawsuit, which was filed in Charleston, S.C., on September 19.

Cox and Olindo worked together to develop a logo and a website and helped promote the business when the apparel brand first started. They also traveled around Los Angeles to meet with vendors.

Olindo received a $50,000 loan from her father for startup funding before the company’s launch in June 2018. Still, Cox claims the Bravolebrity used this as justification to withhold profits from her going forward.

Olindo allegedly had Brian Collie, an attorney with the firm Buxton & Collie, set up L’Abeye as a “sole member limited liability company,” in which “she was the sole member and owner,” according to Cox. The lawsuit claims that Cox was “effectively and intentionally” deprived of “her legitimate interests in the business” because Cox was not listed as a member of the LLC. It adds, “Plaintiff had no knowledge of this false representation made to Collie.”

Cox asserts that both women had concurred that they were co-owners and that she had contributed hundreds of hours to the brand’s development. According to the lawsuit, the fashion merchandiser also claims that Olindo mentioned their partnership in several podcasts and media appearances.

Cox mentions in the complaint that she had a much better work ethic than Olindo.

According to her attorneys, “Plaintiff worked nearly every day to ensure the success of L’Abeye from the initial launch of the business in early 2018 until May 19, 2022.”

Olindo, on the other hand, is said to have “taken frequent vacations and failed to assist with the operations of L’Abeye for weeks at a time,” according to the lawsuit.

Cox asserts that despite the fashion company generating “significant gross revenue and substantial profit” and becoming “very successful and profitable,” she was not given the dues she was entitled to or the correct salary they allegedly agreed upon.

According to the lawsuit, “Plaintiff was unaware of the number of funds Olindo was misappropriating because Olindo was controlling the bank account.”

According to Cox’s attorneys, the TV personality occasionally “mentioned” that the “account funds were low,” which seemed out of proportion to the earnings and profits.

Olindo allegedly “excluded” Cox “from any information about the finances” after heated discussions regarding the company’s accounting.

The lawsuit claims that Olindo unlawfully “terminated” Cox on May 19, 2022, barred her access to the company’s resources and technology.

The disgruntled fashion buyer also alleges that her former business partner “urged” new potential employers “not to hire” her after they parted ways.

The Bravo star allegedly “used her status, educational background, and [their] friendship” to make her “fully dependent” throughout their relationship, the author continues.

Cox has filed a lawsuit against Olindo for 14 different reasons, including breach of contract, dissolution of a partnership, fraud, and defamation. Cox is asking for a jury trial.

She argues that she is entitled to compensation equal to her 50% ownership interest in L’Abeye and “consequential damages” brought on by her ex- “breach partner of the agreement.”

Page Six was informed on Thursday by an attorney for Olindo that their client “does not publicly comment on ongoing litigation. However, it is clear that these accusations, which a disgruntled former worker made, are untrue and misleading. We will soon submit a formal response to these allegations that will assist in establishing the truth.

In the meantime, Cox, through her attorney, told Page Six on Thursday that she and Olindo “built and managed L’Abeye as partners from the very beginning. Ms. Cox gave the company more than four years of her heart and soul.

Despite her best efforts to resolve this issue amicably and between friends, Ms. Cox was forced to file this lawsuit when Ms. Olindo refused to acknowledge her ownership interest in L’Abeye.

The statement’s conclusion reads, “Ms. Cox is only requesting what the two of them initially agreed to. She still has faith that Ms. Olindo will act honorably and acknowledge her as the company’s owner, as she frequently has.

Behind Netflix and Disney+’s Dash for Streaming Ad Cash