Who Is Idaho Murder Suspect Bryan Kohberger? What We Know About Him

Authorities in Idaho have released the most comprehensive evidence to date linking the stabbing deaths of four University of Idaho students to a suspect arrested and charged with their murders last week.

Idaho police have charged Bryan Kohberger with murder in the deaths of four students who were stabbed in November.

Kohberger, a Ph.D. student in criminology at Washington State University who is 28 years old, has been charged with four counts of first-degree murder and one count of felony burglary.

Four students, Ethan Chapin, 20, Madison Mogen, 21, Xana Kernodle, 20, and Kaylee Goncalves, 21, were stabbed to death early on the morning of November 13 in the Moscow, Idaho, home where three of them lived with two other students. Chapin, the fourth victim, was spending the night with Kernodle, who he was seeing.

The Roommate’s Statement To Police

Friends and witnesses say that the four people who were attacked were having a normal Saturday night party before the attack happened. Chapin and Kernodle went to a fraternity party. Mogen and Goncalves went to a bar and stopped at a food truck on the way back to their house on King Road. They were all home by 2:00 AM, and most of them were asleep by 4:00 AM.

No one attacked the other two roommates. In an affidavit released Thursday, Moscow police said that one roommate, identified in the document as “D.M.,” was woken up around 4 a.m. by sounds from upstairs, including what she thought was her roommate Goncalves saying, “There’s someone here.”

D.M. looked out her bedroom door but didn’t see anything. She told investigators that she then heard more sounds, including crying, a man’s voice saying, “It’s okay, I’ll help you,” more voices, a loud thud, and a dog barking.

The affidavit says that when she opened her door again, she saw “a figure wearing black clothes and a mask” walking toward her.

She said it was a man she didn’t know. He was at least 5 feet 10 inches tall, “not very muscular but athletically built, with bushy eyebrows,” she said.

Investigators say that the man walked past her as she “stood in a ‘frozen shock phase,'” and then went to the sliding door in the back of the house. The roommate then locked herself in her room.

Investigators also looked for video footage around the King Road house. The footage showed a white sedan, later identified as a Hyundai Elantra, driving toward the house around 3:30 a.m., driving by the house several times, and then leaving the area “at a high rate of speed” at 4:20 a.m.

Security footage from the campus of Washington State University in Pullman, Wash., where Kohberger is a graduate student, showed a similar white sedan heading toward Moscow, about 15 miles away across the state line, just before 3 a.m., and then coming back around 5:30 a.m.

On November 29, police looked through the cars registered to WSU students and found a white 2015 Hyundai Elantra that was registered to Bryan Kohberger. It had Pennsylvania plates at first, but they were later changed to Washington plates.

After the semester at Washington State was over in mid-December, Kohberger drove the Elantra back to his family’s home in Pennsylvania with his father, who had come to Washington to join them on the long trip. 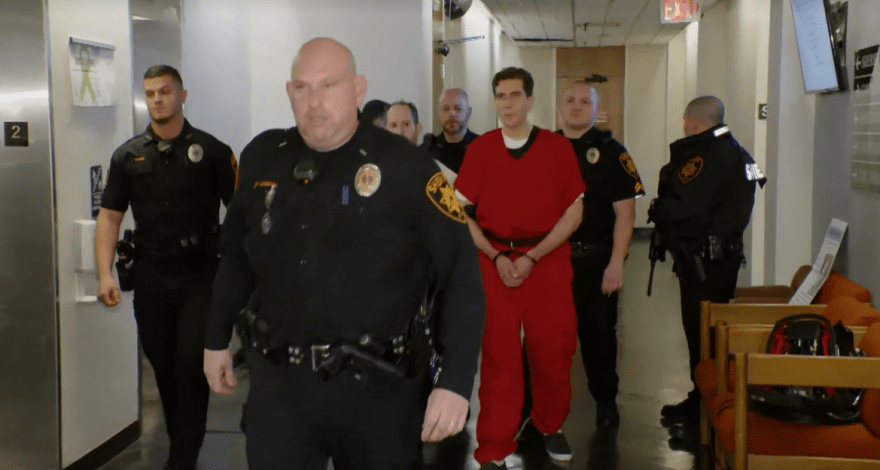 Investigators found signs that the car went back to Pennsylvania. For example, the license plate was taken in Colorado, and the car was stopped for speeding in Indiana.

This week, Indiana authorities released a video of two traffic stops that took place on Interstate 70 east of Indianapolis on December 15, when two different officers pulled over the Kohbergers for tailgating.

The younger Kohberger is driving the car, and his father is in the passenger seat, according to footage from the body camera. Both times, the cops talked to the Kohbergers for a short time and then let them go without giving them a ticket.

A Possible Match In DNA

On December 27, police in Albrightsville, Pennsylvania, found a sample in the trash outside the home of the Kohberger family.

The affidavit says that the Idaho state crime lab found a sample in the trash that is likely from the biological father of the person whose DNA was found on the knife sheath.

“At least 99.9998% of the male population should be ruled out as possible biological fathers of the suspect,” the affidavit says.

After three days, police in Pennsylvania caught Kohberger. He was sent back to Idaho quickly, and he is due in court there on Thursday.

Kohberger’s lawyer, Jason LaBar, the chief public defender of Monroe County, Pennsylvania, said in an interview on Tuesday that the suspect “believes he’s going to be exonerated.”