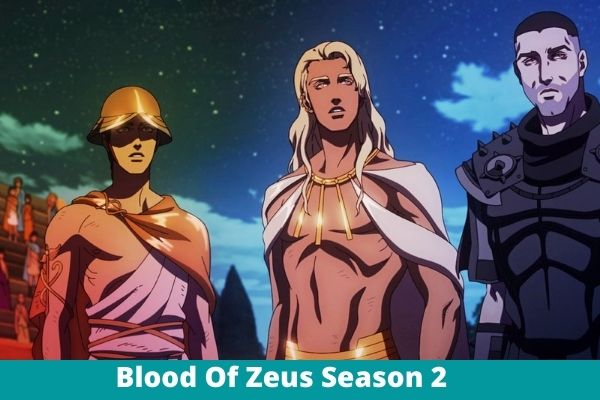 ‘Blood of Zeus’ was produced by Charley and Vlas Parlapanides in partnership with Powerhouse Animation Studios, the production company behind ‘Castlevania.’

It follows a young guy called Heron as he thinks of himself as a bastard. However, when the world is confronted with an unparalleled threat, his true identity is exposed. He is the son of Zeus, the ruler of the gods. Heron then goes on an extraordinary voyage.

He completes tasks, obtains magical and divine weapons, and battles an even more diversified array of creatures than those seen in Greek mythology.

Derek Phillips voices Heron, Jessica Henwick voices Alexia, Claudia Christian voices Hera, Elias Toufexis voices Seraphim, and Jason O’Mara voices Zeus. If you’ve already finished binge-watching the first season and are curious about the second season of ‘Blood of Zeus,’ this is the post for you.

Fantastic news! The popular anime series is returning for a second season! Netflix announced the renewal in December 2020 with a social media post that read:

“The Fates have a message for you! Heron’s exploits will continue in Blood of Zeus season 2.” The renewal is unsurprising, given the anime series’ phenomenal success.

In less than a week, the anime series climbed into the top ten rankings of Netflix in many areas worldwide. Blood of Zeus finished third in the US Top Ten, behind The Queen’s Gambit and The Haunting Of Bly Manor.

We expected the renewal would come at least a month after the series began, and we were delighted to learn that we were correct.

Netflix has not yet announced a release date for Season 2 of ‘Blood of Zeus.’ It will almost certainly be some time before we see Blood of Zeus season 2. Animation projects need a significant amount of time to complete.

The series was initially announced in a March 2019 announcement. However, Netflix took more than a year to release Blood of Zeus.

Unless production on season 2 has already started, we’re going to have to wait until 2022 to see another episode of Blood of Zeus.

The Fates have news! Heron's adventures will continue in season 2 of Blood of Zeus. @powerhouseanim pic.twitter.com/RJXvhIJJkr

Although Heron was unaware, his heavenly father had been protecting him since he was a child, disguised as an older man who looked after him and his mother.

However, when he eventually discovers who he is, he and his mother face the wrath of Zeus’ wife, Hera.

In the season finale, Zeus and his party of gods prepare for battle together with Heron and his companions. Hera also obtains control of the giants after releasing them from their watery prison.

Heron removes the cauldron from Hera’s protection during the struggle, prompting giants to assault her. Zeus devotes all of his might to rescue his bride. Heron battles his half-twin through his mother, Seraphim, and emerges triumphant when his father’s skills materialize in him.

He then reverses the cauldron’s magic, drawing all of the giants’ energy back within. The series concludes with Heron ascending to Olympus and Seraphim ascending to Hades.

The latter is contacted by the eponymous god, who assures him that if he kneels before him, he would have a pleasant existence in his world, causing Seraphim to understand that the gods are not through with him.

With Hades’s debut so late in the season, there is a potential that he may act as the season’s principal nemesis. In season 2, we may witness a different Hera, who is nicer and less cunning.

There are suggestions of a love engagement between Heron and Alexia throughout the first season. It may get some screen time in the second. Season 2 may also concentrate on Heron’s adjustment to the abilities he got from his father.