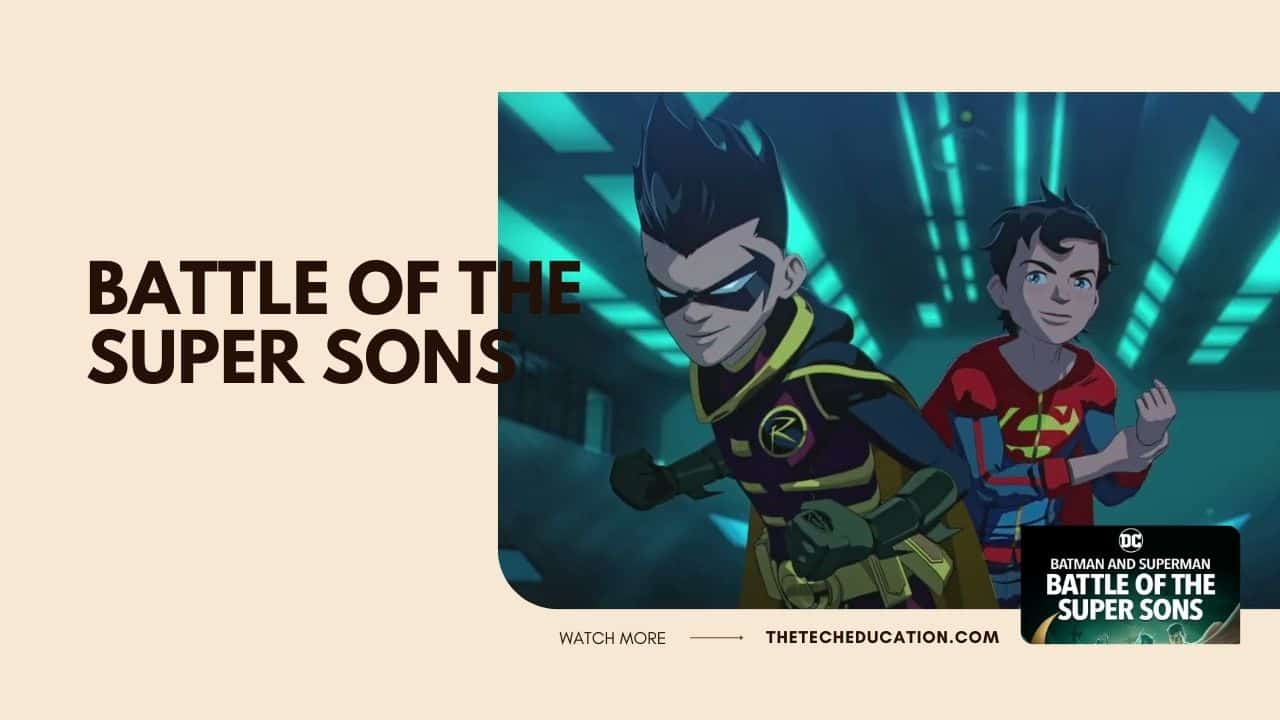 When the Justice League is compromised, Jonathan Kent (Jack Dylan Grazer) and Damian Wayne (Jack Griffo) save the world.

The scions of superheroes save the world from a monstrous threat and become best friends. Batman and Superman: Battle of the Super Sons brings the DC animated universe back to a more family-friendly and fun place. With a Justice League twist, the pre-teen-powered plot tackles adolescent travails. Good humor and slick CGI animation compensate for the lack of surprises. Through a breezy runtime, the narrative unfolds as expected. Jonathan Kent (Jack Dylan Grazer) and Damian Wayne (Jack Griffo) have an exciting start to their adventures.

Lara (Myrna Velasco) and Jor-El (Nolan North) send Kal-El to Earth on a rocket from the doomed planet of Krypton. They don’t realize that a dangerous creature has joined them. Light speed loses the interloper, but it still hurdles in the right direction. Clark Kent (Travis Willingham) is shown growing into Superman in a comic-style montage.

Lois Lane (Laura Bailey) marries him, they have Jonathan, and they move to the Kent farm in Smallville.

Jonathan is frustrated by his dad’s constant absence. His son is less important to him than his work. He tries to soothe his hurt boy but has to leave once again. After some space debris hits the Watchtower, Superman saves it from falling. Jonathan’s outburst reveals an extraordinary ability. Clark and Lois decide it’s time to tell their son of his true heritage.

A Trip to the Bat Cave

Jonathan is stunned by the revelation. For many, a trip to the Bat Cave for a health assessment is a dream come true. Damian Wayne makes a poor first impression of him, but he idolizes Batman (Troy Baker). Surly, Robin doesn’t think much of Superman’s hick kid. Batman and Superman are alerted by a signal from the Watchtower. Green Arrow (Tom Kenny), who summons the entire Justice League for a meeting, seems odd.

Ok Imma just say it outright Battle of the Super Sons is Spectacular it brought my Bois to life in the best way imaginable pic.twitter.com/037ZGrCBdP

Eleven-year-old Jonathan faces the same problems as his father in Smallville. Bullies target him because he’s a nerd. Failure on the baseball team reinforces his dweeb status. “Damian is a trained assassin who has killed more people than Jonathan will ever know.” The grandson of Ra’s al Ghul isn’t a team player. A skilled fighter, Damian is hot-headed and arrogant. When the Justice League is compromised, he springs into action. Under duress, Jonathan has exhibited Kryptonian traits despite his dorkiness. Their fathers passed on the hero mantle to their Super Sons.

I just watch Batman and Superman Battle of the Super Sons.
It was a lot of fun, Superboy and Robin build-up friendship was nice.
The Relationship between their dads was done well.
Go check this movie out if you get the chance.#SuperSons pic.twitter.com/rKvddmHSY0

It looks great how the animation has been done. In terms of style, the film is similar to Marvel Studios. What If…? 3D CGI backgrounds and characters are blended with a nod to classic cartoons? There is no emphasis on extreme realism, but everything is crisp and well-defined. There is just a hint of difference in the clever beginning montage. The filmmakers deliver solid action scenes. The antagonist and its creepy minions provide a needed dark element. You’ve seen this baddie before. It will be compared with the live-action version.

Batman and Superman: Battle of the Super Sons should be viewed as an original story. Lois spells out the main alien attack arc in the story. Jonathan and Damian are awkward youths who find friendship in the film. In battle, their different personalities complement each other. When they work together to overcome daunting odds, you cheer. It was even fun to watch Krypto the Superdog.

Warner Bros. produces Batman and Superman: Battle of the Super Sons. Animation. A theatrical release, streaming, and Blu-ray/DVD release from Warner Bros will be available on October 18th.

According to ComingSoon’s review guidelines, a score of 7.5 is considered “Good.” It’s good entertainment and worth watching, although not everyone will like it.