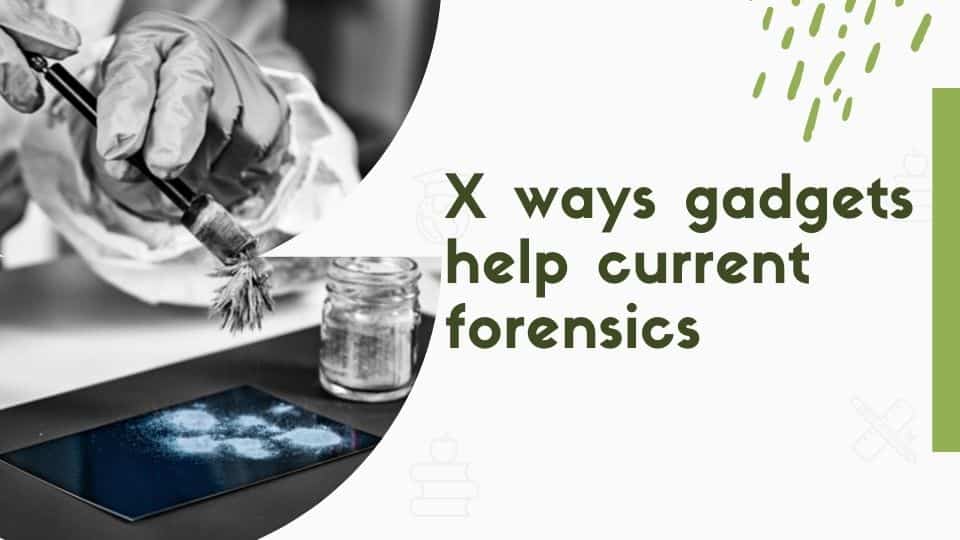 The world is moving at a high pace where smart devices have taken over old techniques. It applies in almost every field such as medicine, and education, where you can seek an online criminal justice degree, business, and now law and order as well. Just like all fields use modern technology to upgrade service quality, some gadgets help processes in forensics.

Data gathered by drones is examined in drone technology forensics. It is simple to install recording software on one of these, and a plethora of information can be revealed during video recovery, in addition to the integrated geo-tracking, EXIF data, planned flight path, flight history, timestamps, and event information belonging to its legal owner. However, if the drone fell and was damaged as a result, recovering the data from the hard drive or SD card may be difficult or impossible without a lot of time and the proper digital forensics methodology.

Retinal scans, facial scans, and fingerprint scans are a few instances of biometric readings whose analysis frequently has a significant impact on how a case turns out. The goal is to reveal a suspect’s identity through comparison. However, forensic data analysis of biometrics might not be as simple as you had imagined in a real-world setting. In real-world situations, a forensic data analyst can be required to work with contaminated, hazy, or incomplete materials. The good news is that contemporary forensic data analysis systems have the technological ability to examine bodily fluids to identify important details about the suspect, such as their age, lifestyle, gender, and even the medications they are taking.

A person’s location can be determined using a variety of personally identifiable information that is collected and tracked by almost every device they use regularly. Even the smartphone you keep in your back pocket keeps track of where you’ve gone and how long you’ve been there. You can see for yourself by opening the Google Maps Timeline.

The field of fingerprint analysis was established when Sir Francis Galton demonstrated how fingerprints might be used for identification. The perpetrator of the crime can be rapidly identified by comparing fingerprints collected at the crime scene to a sizable virtual forensic DNA database of potential matches. When collecting fingerprints at the crime scene, a digital forensics investigator faces enormous demands and difficulties. Not only can they be tainted by incorrect handling and a lack of acquaintance with the right digital forensic acquisition method, but one of the traditional anti-forensic measures used by criminals is wiping off their fingerprints or donning gloves.

Voiceprints are unique, just like fingerprints are. A digital forensics investigator can use forensic analysis of voice recordings to compare audio samples and establish whether or not the voice on two distinct audio recordings belongs to the same person.

Database forensics is used to examine databases’ internal information and retrieve any evidence that might be there. Database forensics investigations frequently rely on cutting-edge tools to successfully extract the data and get around the password that would otherwise bar users from accessing it.

The area of data extraction and analysis from smartphones and other mobile devices is known as mobile phone forensics. Researchers search through contacts, calendars, text messages, pictures, video files, and other multimedia assets as part of the mobile forensics process to find potentially damaging bits of information.

Malware is evolving and becoming more sophisticated. They can conceal their existence on the infected device as a result, and their preferred tactic is to leave as few traces on the hard drive as they can. In other words, they are attempting to conceal themselves in the RAM of the device, which is something that many antivirus scanners overlook. Volatile memory forensics assist in identifying malicious behavior that may otherwise elude detection by more conventional techniques. This is accomplished by obtaining a memory image and conducting an in-depth investigation using the appropriate digital forensics equipment.