Who is Machine Gun Kelly Dating? | “We drank each other’s blood”

Megan Fox and Machine Gun Kelly are inseparable because they love each other and share blood.

After dating for about a year and a half, Fox and MGK, whose real name is Colson Baker, announced on Jan. 12 that they were getting married. Fox, who is 35 years old, wrote that the couple sat under a banyan tree and “asked for magic” when they went public with their relationship for the first time in July 2020.

“We had no idea how much pain we would go through together in such a short, busy time,” Fox wrote. “We were drunk on love and didn’t know how much work and sacrifice the relationship would take from us. Also, karma.”

They went back to that place for a very important reason. In a video posted by Fox, the two are seen kneeling in front of each other at the top of a flight of stairs outside. Fox is wearing a sultry black dress with cutouts, and MGK, who is 31, is wearing a white and black top with a lot of sparkle.

Fox looks very happy in the video as MGK seems to pop the question with the ring in his hand. Fox’s Instagram post says that they got engaged on January 11.

“Then we drank each other’s blood,” Fox wrote.

MGK shared a close-up of the beautiful ring on his own Instagram account. It had two pear-shaped stones, one emerald and one diamond, set on the same band.

The rapper wrote more about the design, saying that “the emerald (her birthstone) and the diamond (my birthstone) set on two magnetic bands of thorns that draw together as two halves of the same soul forming the obscure heart that is our love.”

“Yes, in this life and every life,” MGK said again in his post. “I brought her back to the same branches where we fell in love to ask her to marry me.”

In a Q&A with Fox for Vogue on January 18, MGK talked more about the unique ring. He said that the bands of the ring “are actually thorns.”

At the American Music Awards in November 2020, Fox and MGK walked the red carpet together for the first time.

Fox introduced the rapper before he went on stage that night. She gushed about her new boyfriend, saying that since his first song came out in 2012, the whole world has been “under his spell.” 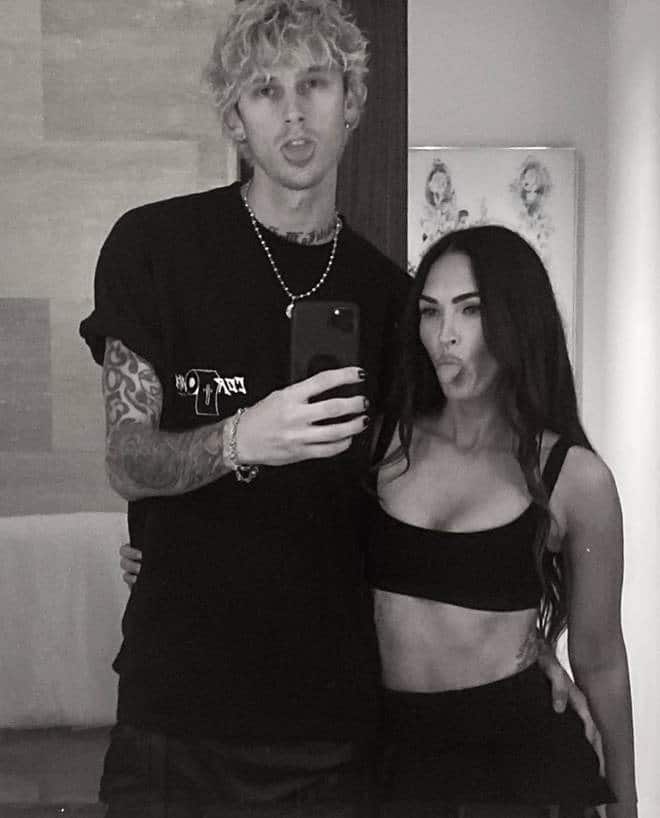 Also, this isn’t the first time that blood has been a part of their strange relationship. In 2021, on their first Valentine’s Day together, MGK posted on Instagram that he wears a necklace with some of Fox’s blood in it. “I wear your blood around my neck,” he wrote in the caption of his post at the time.

In the short time they’ve been together, they’ve been on double dates with fellow punk couple Kourtney Kardashian and Travis Barker, celebrated their birthdays together, and held hands at many award shows.

In an October interview with GQ Magazine UK, the two talked about what they called the “demonic side” of their relationship.

Fox said at the time, “Our souls chose this so we would be forced to face our shadow selves, the parts of ourselves we didn’t want to know and tried to hide.”

MGK also said that their relationship “should be light, but also we go to hell with each other.”

“It’s both happiness and pain,” he said. “I don’t want people to think that our lives are perfect. I didn’t say that it was the darkest fairy tale for no reason.”

This is the “Transformers” star’s second marriage. From 2010 to 2021, Brian Austin Green was Fox’s husband. Bodhi Ransom, 7, Journey River, 5, and Noah Shannon, 9, are their three sons.

MGK is getting married for the first time. He has a 12-year-old daughter, Casie, from a previous relationship.

When Did Grimes And Elon Break Up? What is the reason of Their Breakup?