Based on Volker Kutscher’s Berlin-set Gereon Rath crime series, ‘Babylon Berlin’ is a neo-noir program about a police investigator named Gereon Rath who is on a quest to uncover a Mafia-run extortion ring in Berlin.

While assisting his partner Charlotte Ritter, he quickly becomes entangled in a web of crime and deceit. The series, created by Henk Handloegten, Tom Tykwer, and Achim von Borries, premiered on Sky1 on October 13, 2017. The series premiered on Netflix in January 2018 in the United States, Australia, and Canada.

Throughout three seasons, reviewers have lauded the show’s flawless fusion of crime and history, cinematography, soundtrack, and captivating performances from the primary actors.

Unsurprisingly, it has a sizable worldwide audience awaiting its return for a fourth season. If you’re wondering when ‘Babylon Berlin’ will return for season 4, we have a lot to say.

Season 3 concludes on a cliffhanger, with Wall Street collapsing, wreaking havoc on the Berlin Stock Exchange.

Rath convinces Böhm not to commit suicide and coerces Wendt to confess his role in the Benda murder plot. He meets Helga and Nyssen, and the season finishes, leaving much to the fan’s imagination.

Season 4 is anticipated to dig further on Rath and Charlotte’s relationship, given they kissed in the previous season.

Additionally, they want to know why Rath takes such a high amount of morphine, which results in psychedelic illusions. The third book in Gereon Rath’s acclaimed crime series, ‘Goldstein,’ features Abraham Goldstein, an American mobster.

Numerous stories in the forthcoming season will be inspired by it. As a result, we anticipate a significant increase in action and drama in the fourth season, set in the early 1930s.

Given that Nazism genuinely started to take over German society during those years, and it is also mentioned in Kutscher’s book, it is reasonable to assume that the program will touch on it somehow.

Although neither Netflix nor the production company behind “Babylon Berlin,” Filmgesichter has confirmed a release date for season 4, we can predict when it will be accessible.

According to actor Volker Bruch, season 3 consisted of 12 episodes and took around six months to produce from November 2018 to May 2019.

Season 3 premiered on Sky 1 on January 24, 2020, a month before it premiered on Netflix. Thus, the commencement of Season 3 production and its Sky debut was around 14 months.

Fortunately for fans, work on season 4 has already begun. Filmgesichter advertised a casting call for 2,000 extras for the following season in January 2021.

Additionally, the casting notice said that Season 4 will begin shooting “in the spring.” As of May 4, filming was still occurring.

Thus, assuming Season 4 follows the same timetable as Season 3, its debut will occur at the earliest in the summer of 2022.

So yet, just one new cast member has been confirmed for “Babylon Berlin” season 4. Mark Ivanir will join the program, Deadline reports.

The Ukrainian-Israeli actor has starred in television shows such as “Homeland,” “Transparent,” and “The New Pope,” in addition to films such as “The Terminal” and “Get Smart.”

Ivanir’s function has not been revealed, but given that he is the only significant addition to the cast at the moment, we’re safe assuming that he will be Season 4’s new big evil – for more information, check the storyline section below.

Volker Bruch and Liv Lisa Fries are almost certain to reprise their roles as Gereon and Charlotte. Otherwise, most of the show’s recurring cast members will almost certainly return. Season 3 marked the reintroduction of Gereon’s brother Anno, who had been presumed dead during World War I.

This created complications for Gereon and Anno’s wife Helga Rath, who began dating after the war. Hannah Herzsprung and Jens Harzer will very certainly reprise their roles as Anno and Helga. 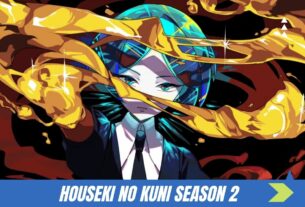 Houseki No Kuni Season 2: All Updates Here That You Want To Know!