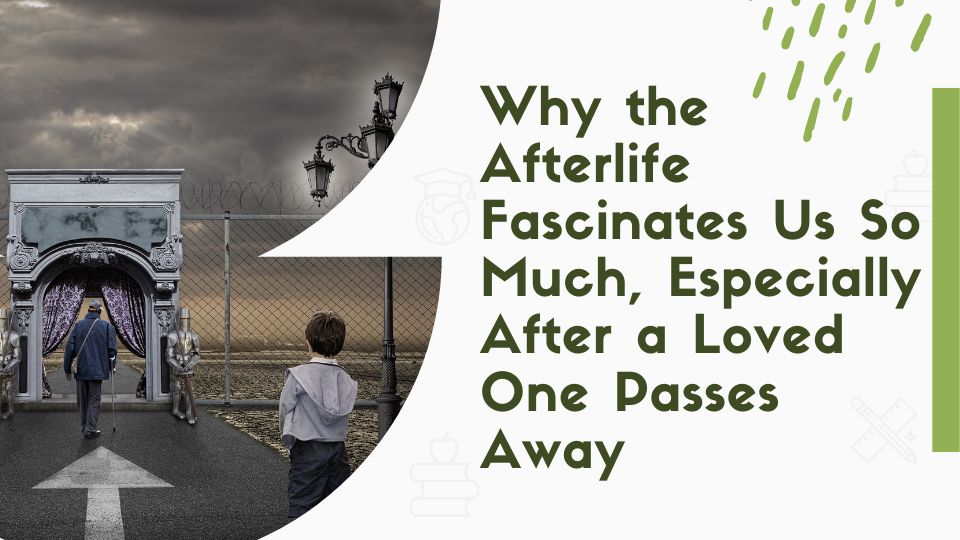 An interest in the afterlife is not a modern phenomenon; cultures all over the world, for thousands of years, have developed their own beliefs and traditions concerning what happens when we pass. From the Egyptian custom of entombing their pharaohs with the items they would need in the life beyond this one to the Medieval concern with avoiding purgatory (and, of course, hell), the afterlife has and continues to fascinate us.

We take a closer look below at why so many of us are drawn to an idea of an afterlife and how this manifests in society’s customs and traditions today.

When someone close to us passes away, it is natural to harbor an extremely strong desire to speak or make contact with them. Whether this is to simply feel the comfort of their presence once more, to ask for specific guidance, or to resolve an issue or conflict that wasn’t sorted out in this life, many people feel this urge to connect with a loved one that has passed.

More people than ever before, of all ages and backgrounds, are seeking to do this through, for example, a medium, a psychic tv show, or a group session where a psychic imparts information that they receive from the spirit world to the relevant individual in the audience. Of course, many question the authenticity or credibility of these things, but for those who visit, view, or attend them, they can bring significant comfort and lay to rest feelings of guilt, resentment, or anger.

There is something inherently reassuring in believing in an afterlife: it affords the certainty that our existence won’t end with the death of our mortal bodies but will continue in a new realm. As well as offering the comfort that our loved ones are waiting for us on this other spiritual plane, it means that our own life will continue in a new form: we will have the chance to fulfill the potential of our spirit and resolve any issues that we faced in this one.

Historically, a belief in the afterlife was a useful tool for monarchs to keep their subjects toeing the line: if you committed a crime or entertained a treasonous thought, you may get away with it in this life, but a reckoning would be waiting for you in the hereafter.

NDEs (near-death experiences) continue to be fascinating for us as a society; Hollywood has drawn on this, too, producing blockbuster movies about what happens to us at the moment of death. These cases of people who have been afforded – possibly – a tantalizing glimpse of the afterlife have been the cause of much debate within the medical and scientific communities. Whether they’re simply the result of oxygen starvation in the brain causing a feeling of euphoria or the first steps on the road from this life to the next, these experiences continue to draw us.

For many of those who have experienced an NDE, they’re life-changing. There are accounts of people who were formerly police officers, or serving in the military, who were unable to return to their jobs afterward; the idea of causing hurt to another individual became abhorrent to them; instead, they sought new careers in helping or caring professions.

Interest in Past Lives

Another reason the afterlife holds such an interest for us is that it allows for the possibility of past lives. Past life regression has become a hugely popular psychic service: it purports to allow the participant to access memories connected to lives they have lived before this one. There is something inherently fascinating about the possibility that, in a previous life, we could have been a Georgian sea captain, a Tudor lady-in-waiting, or a citizen of Ancient Greece.

For some people, a regression can help to clear up formerly unexplainable phobias: for example, the person who has had an unaccountable and severe fear of fire for as long as they can remember may discover that, in a past life, they were a victim of the Great Fire of London. For others, undergoing regression therapy is a way to come to terms with mysterious feelings of guilt, sadness, or regret that have no identifiable basis.

Scientific theories regarding other dimensions and multiple realities have begun to merge the line between the spiritual and the physical realms. This has resulted in a new focus on just how separate science and the supernatural are, after all: for example; perhaps ghosts could be beings – like us – that are simply existing in a different dimension to ours.

Thoughts and beliefs regarding the afterlife are brought increasingly into the spotlight as the boundaries between these two fields blur.

Whatever our individual circumstances, a belief in an afterlife can bring an inordinate amount of comfort, especially in the wake of the passing of a loved one. Finding a way to move on while still feeling the comforting presence of the person we have lost can help us to deal with the grief and carry their memory into the future.