By Shreya Jain On Aug 3, 2022
simon cowell before and after
Share

Simon Cowell, the judge on Britain’s Got Talent, has had some work done on his face. He recently made headlines when he appeared at the premiere of the reality show. The ITV talent show returned to television screens on April 16, 2022, after a two-year hiatus. Fans couldn’t get enough of Simon’s new look as he joined Alesha Dixon, Amanda Holden, and David Walliams on the panel. Continue reading the article to learn more about Cowell’s cosmetic surgeries.

Who is Simon Cowell?

Simon Philip Cowell was born in London, England on October 7, 1959. He grew up in Elstree, Hertfordshire. Julie Brett (1925-2015), his mother, was a ballet dancer, and his father, Eric Selig Phillip Cowell (1918-1999), was a real estate agent. Cowell attended Radlett Preparatory School and the independent Dover College.

In the year 2001, the TV star first caught the attention of viewers when he was hired as a judge on the show Pop Idol. He and show creator Simon Fuller pitched the show to ITV Controller of Entertainment Claudia Rosencrantz. He never looked back after that. On reality shows, the 62-year-old is well known for saying, “I don’t mean to be rude, but…” His one-liners have become popular among audiences in recent years.

Everything you need to know about Cowell’s plastic surgery

Simon has a smooth brow, plump cheeks, a slim build, and frighteningly white teeth. He’s gone through a lot of changes over the years. His surgery rumors have been circulating for a long time. His total transformation appears to be the result of several factors, including healthy eating and Botox.

During an interview with Glamour, Cowell expressed his love for Botox, saying, ‘To me, Botox is no more unusual than toothpaste. It works, you do it once a year – who cares?’ Later on, he admitted to getting fillers that smooth out wrinkles by temporarily paralyzing muscles – something that could have contributed to his brow being heavy due to a loss of support from his forehead muscles 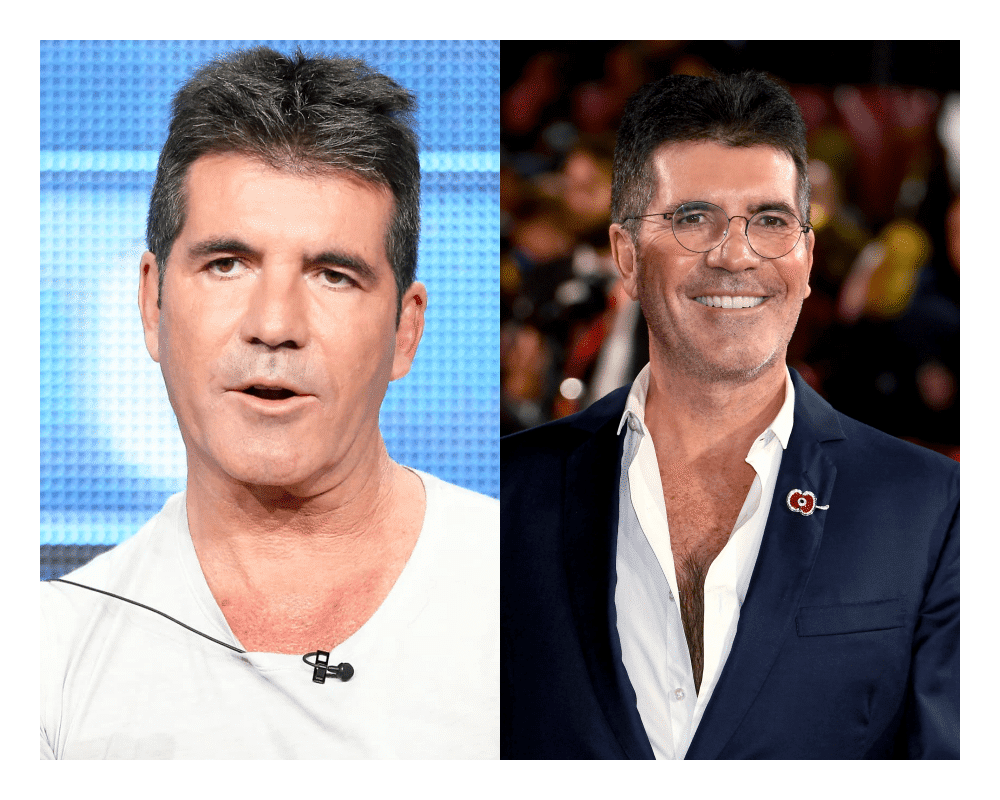 In 2018, the record producer had a ’21st-century facelift’ to improve his appearance. He chose a ‘Silhouette Soft Lift’ from Dr. Jean-Louis Sebagh, dubbed the “Picasso of Dermatology.” The procedure costs £2,000 and involves sewing a bioplastic-infused thread into the face and tugging it to reduce sagging.

‘There’s a lot you can do now,’ Simon said in an interview with The Sun. You don’t have to smother your face in filler and Botox. It hurts like hell, but it removes sun damage and unplugs everything. It’s all about having clean skin for me right now. You look better with clean skin.’

He continued, “Within 24 hours I changed my diet and I’ve not looked back since. You feel better, you look better. ‘I cut out a lot of the stuff I shouldn’t have been eating and that was primarily meat, dairy, wheat, sugar — those were the four main things.”

What Did Simon Think About His Cosmetic Surgery?

Cowell has previously stated that he didn’t recognize himself before he had fillers and has since removed them. He stated, “There was a stage where I might have gone a bit too far. I saw a picture of me from ‘before’ the other day, and didn’t recognise it as me first of all, Eric was in hysterics. Enough was enough. There is no filler in my face at all now. Zero.”

Additionally, the television personality said, “There was a phase where everyone was having their faces pumped full of this and the other. But actually, for me now, a lot of it comes down to healthy eating and drinking tonnes of water.”

Simon later admitted that he regretted getting the decision to inject fillers into his face. He finished by saying  “Hopefully I look better now – I probably did have a little too much Botox a couple of years ago, because everyone on TV has it. Now I have facials, but nothing too extravagant at the moment. I have a girl who comes here and does a great face massage – it’s very relaxing.”

What Did Fans Think Of Cowell’s New Look?

Fans couldn’t stop reacting to Simon’s appearance on television as soon as he appeared. They deluged the social media platform with messages.

According to one user, “Simon Cowell literally has more plastic on his actual self now than his Madame Tussaud’s equivalent.”

Simon Cowell has literally more plastic on his actual self now than his Madame Tussaud’s equivalent 🫤 #bgt pic.twitter.com/cRyEabrthH

How old is Simon Cowell’s baby?