Lion Attacked A Zoo Worker In Dakar, Senegal As He Tries To Pet It To Impress The Visitors!

On February 23, a lion attacked at Park Hann, a zoo worker in Dakar, Senegal. The zoo was a worker who was trying to PET the lion as he was to impress the visitors. He crossed the barrier and moved towards the lion’s cage to touch the deadly animal.

Terrifying video footage shows how fiercely the lion was about to devour the man’s arm from behind the bars of the cage. The lion almost bites the man’s hand from the socket. As the video shows, it firmly held the man’s hand in its mouth.

The man in the video was shouting and screaming as the lion locked its jaw around the zoo worker’s hand. The man was screaming and calling at his best to free himself from the grip of the lion.

Few visitors also threw some stones and pebbles at the lion so that the man can get rid of the lion. All the visitors also started screaming and shouting in panic. – 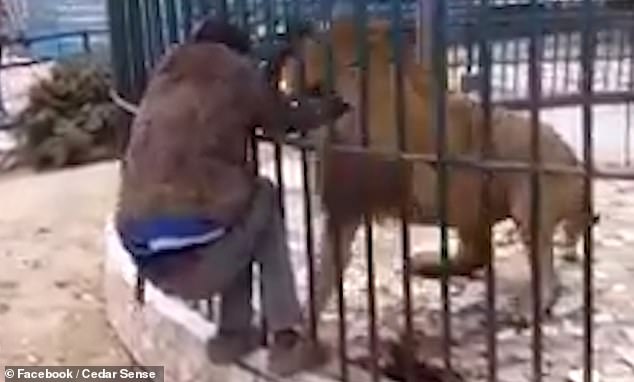 However, in self-defence, the zoo worker hit the lion on its head with his left hand. This led the lion to release the man’s right hand from its mouth.

After getting rid of the lion, the man leaned over the security barrier in relief. His right arm was intact, but blood was dripping from his arm.

According to the news reporters, the zoo worker named, Abdoulaye Wade was found to provoke the lion several times before the attack. Abdoulaye’s main motive was to impress visitors. And he put his right arm inside the beast’s cage and provoked it to bite his hand.
This was followed by an incident of ‘a dangerous game of cat and mouse’ which was witnessed by the visitors.