If you attend enough football matches, you will hear the abusive language. Fans may not mean it badly, but their words still carry weight.

An Episode Of Homophobic Football

It was a cold March night at MacDiarmid Park. St Johnstone had just salvaged a draw against Hibs with an equaliser in the 83rd minute. As the referee blew the full-time whistle, the exasperated breath of a few thousand Hibees met the air our heads. We stood up, almost in unison, clutching programmes and scarves; we began the trudge out of the stadium. Despite the scoreline, I was happy. 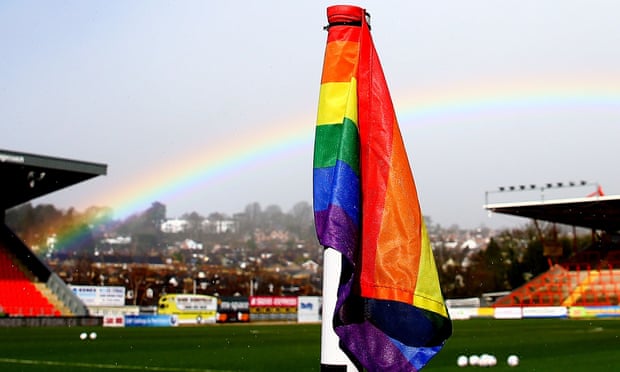 As we left, we saw Ally McCoist in the punditry booth, elevated in the corner of the ground. A group of men start chanting “Ally, Ally, gies a wave!” and soon enough, at least 100 people joined in. Ally obliged with a big grin, knowing that this adoration was only fleeting. Still, the crowd cheered, happy to be acknowledged. Then from some unidentifiable source in the crowd we heard “Aye, ya fuckin’ poof!” and suddenly it didn’t seem quite so difficult to remember why I’ve never been a season-ticket holder.

The comment didn’t provoke much of a reaction. I, personally, am not even particularly offended by it at the moment; I just forgot that this was what it was like, that despite the years of rainbow laces and captain’s armbands, Scottish football – that is, men’s Scottish football – still has a problem with homophobia.

How Does the Football Committee React To Homophobia?

According to a 2016 survey by Stonewall Scotland, people who witness anti-LGBT abuse at a sporting event, 82% had seen it at a football game. Indeed, just over half of Scottish football fans surveyed by the Equality Network in 2017 reported witnessing homophobic behaviour at a football ground. While rugby fans are praised for the welcoming atmospheres they create at Murrayfield. The same cannot be said for the crowds that gather weekly in the grounds of football stadiums across the nation.

The zero-tolerance approach of clubs towards racism has been commendable. Empowering fans to report instances of unacceptable abuse has yielded real results, such as the two Hearts fans given indefinite bans in 2018 because their fellow supporters alerted the club’s staff to the racist abuse they had been spouting from the stands. And yet while the policies against homophobic language remain as stringent as that against racism, the reality of enforcement is different.

READ  Virat Kohli On The Verge Of Joining Elite IPL List: With A Win Today Kohli Will Be Winning His 50th Match As RCB Captain

This is, I think, partly because of the way homophobic language has embedded itself so deeply into the Scottish vernacular as to seem almost innocuous. Once, while I was working as a tour guide, an older bloke, I worked with jokingly called a straight colleague a “poof” in front of me. Quickly realising his faux pas, he proceeded to profusely apologise: “You know I didn’t mean it in that way,” he said. And he didn’t, not really.

In all my dealings with him, he had never said an unkind word or treated me in any way different because I was gay. The story just slipped out. He meant to good-naturedly tease my colleague for being a “wimp” or a “coward”. The trouble was he ended up inferring that those were immutable characteristics of, well, me.

Football Fans Try to Make a Hospitable Environment for LGBTQ+

The problem isn’t really that fans are aiming to make football grounds an inhospitable environment for LGBT people. It’s just, in football, abuse of all kinds has traditionally come with the territory. Just listen to the language hurled at referees and officials (or observe their dwindling retention rates, particularly of those working in amateur leagues). Most football fans, you would guess, don’t want referees to take their insults to heart. It is just part of the game, the passion for the team they love expressed in a verbal tirade against a dubious decision.

Referees at least know what they are signing up for. Gay people are treated mainly as collateral damage. Chances are, if you attend enough matches, you will hear someone called a “poof” or a “buftie”. And even if they don’t mean it in that way, the words carry a different potency when they have been used as a weapon to beat you with. I can easily distinguish the subtle differences of a word’s meaning through the intent and context of how it is used, but the point is that I shouldn’t have to. I want to watch football.

Football Needs a Gay Individual To Stand Out

Many people point to the notable absence of any openly gay football players in a major league as proof of the inhospitable environment. The tragedy of Justin Fashanu, no doubt hangs over the head of any professional player that might contemplate going public about his sexuality. Fashanu’s suicide occurred in the limelight. He hung himself after being accused of sexually assaulting a 17-year-old boy in the state of Maryland.

As his suicide note stated: “I realised I had already been presumed guilty. I do not want to give any more embarrassment to my friends and family. However, I think it is fair to say that football clubs themselves are more welcoming places to gay players than they ever were in Fashanu’s time. It may seem that rainbow laces have had a little tangible effect, but the very fact of their visibility signals a promise of acceptance that has been long overdue. Even if the presence of Malky Mackay as the SFA’s performance director – a man with a known history of casual homophobia – is hardly heartening, the environment for homosexual players is undeniably more welcoming than it ever has been.

Need Of A Professional Gay Footballer

It is not so much the fear of discrimination that keeps players from sharing who they are, but fear of the fanaticism and intrusion they would face should they choose to tell the media. A gay football player would not only have to deal with the inevitable heckling of the opposition fans. They will also widen society’s need to celebrate them for an attribute they never had a say in; a facet of their character that, unlike their skill as a player, didn’t take years of graft and training. The dilemma any prospective gay footballer faces is that their story would overshadow their career.

Whoever chooses to become the first openly gay professional male football player in the UK would be falling on a sword that would bleed them of their privacy. By coming out, they would destroy any chance of being known solely for their talent as a player rather than a personal life that the tabloid newspapers would undoubtedly feast upon.

And yet, it is necessary. Because until young gay players can see themselves in the Premier League, all but the strongest-willed will hang up their boots prematurely. Young players have to deal with the fierce competition of getting scouted. The stress of negotiating contracts, possibly uplifting their lives year-upon-year to maintain a career. Any other added stress increases the chances of failure. Nobody should have to sacrifice their comfort to prove that a gay player’s life doesn’t have to end in tragedy. But until they do the absence of a role model will continue to damage not just individual players but the game as a whole. How much talent has already been squandered due to fear of prejudice? How is anyone expected to report homophobic language when the victims of its damage remain anonymous?

I stopped playing soccer when I was 12 years old.

And despite what I told my parents I didn’t stop because I didn’t enjoy playing any more. I stopped because the boys on my team made me feel as if I didn’t belong there. Though I never exactly minced into training humming a show tune. Children are so readily trained in the prejudices they inherit from those around them. Even if I barely spoke, it was as if my silence proved something. Something that I wasn’t even sure of myself. So, I quit because it was too hard to get bullied and play football. It would be too anxiety-inducing an experience for a 12-year-old to cope with. A gay footballer might have given me hope. He would, at least, have shown me that the secret I harboured within me wasn’t incompatible with success in football.

In all likelihood, I would never have amounted to anything as a player (I was, at best, a serviceable right-winger). However, we will never know how many goals have gone unscored or trophies unlifted. Senseless prejudice robs the world of talent. Until that talent can walk onto a pitch. Without the fear of slurs, chants or cheap journalistic jokes about what happens in the showers at full-time. We will continue to be impoverished. An openly gay footballer wouldn’t just benefit the LGBT community; it would help football.

Read Next: Tim Thomerson Happily Celebrating Years Of Togetherness with His Wife!! Here Are The Details About His Journey.