With The Umbrella Academy‘s next season already under production, a new look has been released. The makers of the show have teased its audience with Diego’s new look. Diego, one of the seven sibling’s look has been changed by the makers. He doesn’t look like he used to in the first run of the show.

The Umbrella Academy showed the viewers a different type of superheroes through which the show gained popularity. And soon enough, it became a success on Netflix and also renewed itself for another season.

The new teaser showed Diego with long hair and a beard. Now, most fans are confused that why Diego’s look has been changed? To answer that we have to remember somethings from the previous season of the show. We know that Ellen Page nearly caused the end of the world and to prevent the same from happening five of them travelled through time.

This clearly explains why Diego’s look has been changed completely. Through this new teaser, the fans hope to see changes in the appearances of other characters also. 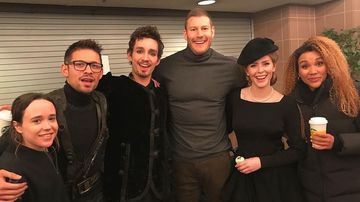 The shooting for the new season was over in November 2019. Now, the team has been working on the editing and visual effects for the new season. Recently, on Instagram, the show-runner Blackman shared a photograph showing the editing process of the show. As many fans were worried because of the coronavirus pandemic which made all Netflix halt all productions.

But don’t worry the editing team is working cautiously with the work. Therefore, now, the fans are assured that the new season will air soon enough.

We all know about the show’s storyline which depicts seven children who were born with a superpower. And as soon as they were born, they were adopted by Sir Reginald Hargreeves forming the Umbrella Academy. In the finale of the show, the cousins were seen attempting to save the world.

And for the same to happen five of them had travelled through time which means a lot is underway. In the new seasons, the fans hope to see something that would blow their minds away.